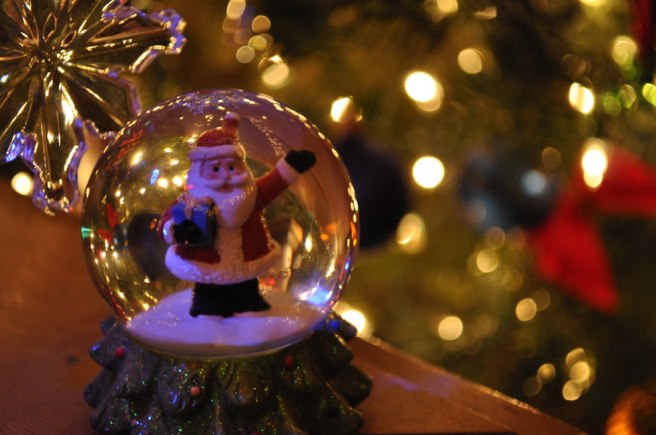 “What’s wrong, Hope?” My sister’s voice floated up to me.

I heard Kristen’s footsteps stomping up the stairs to the attic.

“What are you doing up here anyway?” she said.

I brushed some dust off a box and set the snow globe on top of it.

It was old—probably an antique by now, and it held a little snow-covered house with Santa and his reindeer flying over it. The water inside it had started to evaporate, and Santa, who hung from the top of the globe, was no longer submerged.

“I’m getting out Mom and Dad’s old decorations,” I said.

“I can see that,” Kristen said, surveying the dusty artificial wreath and Christmas ornaments I had unearthed. “What I mean is what are you doing up here right now? You’re supposed to be getting ready for a date.”

“I know,” I said. “I just really wanted to put this snow globe out before I left. I always believed it was magic—it brings Christmas cheer.”

“Why do you need Christmas cheer right this moment?” Kristen said.

I didn’t reply. I turned my attention back to the snow globe. I turned it over and checked the little box on the bottom. It still had a battery—it just didn’t light up.

“Hope,” Kristen said, “Mark Frye is the most eligible bachelor in the city. You’re super lucky that he likes you. You need to get ready.”

Kristen took the snow globe out of my hands.

“What do you want with this old thing anyway? It was Mom’s, wasn’t it?”

“Yes, it was Mom’s,” I said. “And it was her mom’s before that. It’s an heirloom—and it reminds me of our childhood.”

Kristen set the snow globe down on a dusty shelf.

“Well, Mom and Dad moved to Florida,” she said. “They moved on. You should, too. If you really want a snow globe, I’ll get you a new one.”

She steered me toward the attic stairs. “Now you need to go.”

Kristen sighed as I skirted around her and grabbed the snow globe. Then I let myself get dragged out of the attic.

An hour and a half later, I was as ready as I was ever going to be, and I was just leaving the bathroom when the doorbell rang.

Kristen was already waiting by the door.

“Thanks,” I said. “Did you seriously come down here to watch me as I answered the door?”

“Of course not,” Kristen said. “I just happened to be here.”

I shooed her away as I opened the door.

Tall, dark, and sleek, Mark was waiting for me on the doorstep.

“You look lovely, Hope,” he said as we headed out into the night.

We went to a new, trendy restaurant, and everybody there seemed to know Mark.

We were ushered to a great table, and the food was excellent. We fell into conversation easily, and as the evening progressed, I realized that Mark was fun to talk to.

Eventually the conversation turned to Mark’s political aspirations—he was going to run for city council and maybe even mayor someday.

“Forgive me,” he said as dessert arrived, “but you don’t seem very excited about my upcoming campaign. Most people really light up when I mention that.”

“I’m excited for you,” I said. “I really am. It’s just that I can’t stop thinking about something silly—something small that’s bothering me.”

“It’s this old snow globe of my Mom’s. It used to light up and now it doesn’t. I feel like the light has gone out on my childhood Christmas memories. That’s not true, of course, but it’s how I feel at the moment.”

Mark nodded. “I understand. You remember how things used to be, and you feel nostalgia. What I’ve learned in my career is that it’s better to let go of the past and keep moving forward. Get yourself a new snow globe. Or better yet, forget about it and move on.”

“My sister said something like that, too,” I murmured.

The rest of the evening was pleasant, and I returned home in a good frame of mind.

As I walked into my house, my sister pounced.

“How was the date?” Kristen said.

“But something’s missing,” I said.

“I knew it!” Kristen said. “You find something wrong with every guy who takes an interest in you.”

“There’s nothing wrong with Mark,” I said. “He’s wonderful. But somehow I don’t feel a spark.”

Kristen opened her mouth to answer, and the doorbell rang.

She looked around. “I bet that’s him. He’s come to ask you on a second date. Answer it!”

She pushed me toward the door.

I opened the door, expecting to see Mark’s tall, dark silhouette, but instead there was a scruffier figure dressed in jeans.

Owen had just moved back to town after several years away—he was working for his dad’s construction company.

“Hey, Hope,” he said. “I was just in the neighborhood, and I noticed that you’ve got a string of Christmas lights out. I’d be happy to take a look.”

I grabbed my coat and followed Owen outside.

The night was cold and crisp and very dark. But there was plenty of light thanks to the bright Christmas display in my yard. Owen was right—there was a string of lights out in the middle of an evergreen bush. The lights were still on above and below it, so the dark spot was pretty noticeable.

Owen began fiddling with the darkened string of lights.

“I’m pretty good with these,” he said. “I’ll find the broken one in no time. It only takes one bad bulb to put the others out.”

I watched Owen as he worked. I had known him just a little in high school—and lately I had been seeing him around town. There was something intriguing about him.

After a moment, the string of lights in the middle sprang to life.

“You just find the burnt-out bulb,” Owen replied, “and replace that one. Then the others will be good as new.”

“Where did you find a replacement bulb?” I asked.

He ran a hand over his hair. “I might have had one with me. I noticed yesterday that those lights were out, and I thought I’d stop by some time and see if you were in—see if I could offer some assistance.”

He turned to go.

“I’ve got an old snow globe,” I said. “It has a battery in it, but it no longer lights up. Maybe it’s silly, but it’s important to me, and I’d like to get it working again. Would you mind taking a look at it for me some time?”

Owen smiled and ducked his head. “Good night, then.”

“Okay,” Kristen said as I closed the door behind me. “Two gorgeous guys come looking for you on the same night. How lucky can you get?”

My phone buzzed then, and I went to pick it up.

“You’re going to have to choose,” Kristen said. “Which one is it? Mark or Owen?”

“I don’t even know if Owen likes me,” I replied. “And I barely know either of them.”

“Just humor me. If you had to choose based on first impressions, who would it be?”

I smiled at Kristen and turned for the stairs. “Good night. I’m going to bed.”

Up in my room, I got ready for bed, and as I went to turn off the light, I picked up the broken snow globe that sat on my bureau. It was still dusty, but I gave it a little shake and watched the snow swirl around the house as Santa and his sleigh flew overhead. Kristen’s parting words came back to me, and I smiled to myself. Though I had given her a hard time, I knew whom I would choose—if I had the chance.

“I choose Owen,” I whispered to the snow globe.

And just for fun, I flipped the broken switch to “on.”

The snow globe instantly lit up, illuminating Santa and the house.

“Guess I chose right,” I murmured.

Thanks very much for reading!

View all posts by catherinemesick